Simon Tribelhorn is Managing Director of the Liechtenstein Bankers Association (LBV). After completing his studies at the University of St. Gallen, he worked as a lawyer in the banking sector for six years, most recently as a legal consultant in the legal/compliance area for the Raiffeisen Banking Association in St. Gallen for four years. He has worked for the LBV since February 2006, initially as a lawyer and later as Deputy Managing Director. In January 2010, he was appointed Managing Director of the most important association of the financial sector in Liechtenstein.

Sustainability is a must6 min read

The third record summer in this still relatively new century ensured that it is not only environmental activists, scientists and isolated media or politicians who are highlighting climate issues. The topic has finally become part of the mainstream. For many people, their enjoyment of the nice weather is tempered by worries about the future. Melting...

With our newsletters, you get press releases about our company, views on developments in the crypto industry and the latest expert blog articles sent straight to your inbox. Choose from our range of newsletters and register here.

Get weekly information from our specialists about selected events and developments about the crypto market. Our blockchain-experts are responsible for the selection and evaluation of the news.

Built on the #Ethereum #blockchain, Europe's first #tokenised real estate #AIF fund has now been approved by #Liechtenstein's regulators. Pleased to be part of this project with our strategic partner #TokenFactory.

The fund enables investors to gain exposure to a global real estate portfolio through a ERC-20 security token.

"Tokentum Liechtenstein" by @Wirtschaftregio: With our Head Fund and Capital Markets @RaphaelHaldner explaining how it came to the approvel of the first fully regulated #AIF in #Europe using #tokenised fund units and the role of @BankFrick within this project. 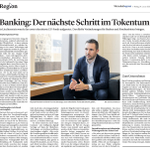 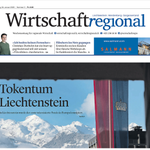