Ulf Wiger became one of the first commercial users of Erlang. In 1996, he joined Ericsson and became Chief Designer of the AXD 301 development, arguably one of the most complex system ever built in Erlang. Ulf has been involved in products based on the AXD 301 architecture, and has been an active member of the open source Erlang community. In February 2009 he became CTO of Erlang Solutions. He is currently working on the æternity blockchain.

Ulf Wiger is responsible for the development of the aeternity blockchain based on the Erlang programming language. He was one of Erlang’s first commercial users in the early 1990s, before joining Ericsson to work alongside Erlang inventor Joe Armstrong. As a veteran in this field, the Swedish programmer talks about the beginnings of Erlang, great...

With our newsletters, you get press releases about our company, views on developments in the crypto industry and the latest expert blog articles sent straight to your inbox. Choose from our range of newsletters and register here.

Get weekly information from our specialists about selected events and developments about the crypto market. Our blockchain-experts are responsible for the selection and evaluation of the news.

In our new blog post, our Head #Blockchain #Banking @RautiStefan focuses on the benefits of #Europe's most comprehensive #blockchain regulation – the #Liechtenstein #TVTG – and its implications for #DLT service providers. https://blog.bankfrick.li/the-blockchain-act-new-business-for-the-entire-sector/

The @EntEthAlliance launches #testnet focusing on improved interoperability and former @CFTC chairman @GiancarloMKTS aims to accelerate the launch of a #CBDC in the #US – read the latest edition of our #CryptoIndustryReport on http://frick.ly/CIR16. 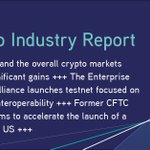